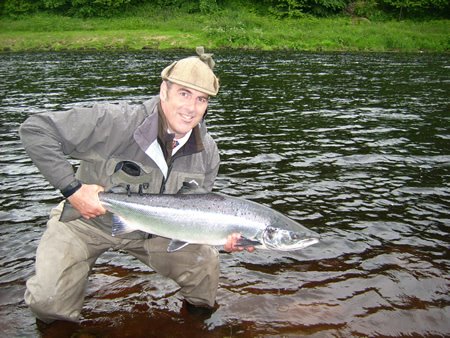 This past week has seen a variety of fishing conditions. The week began with relatively low water and frosty mornings but the temperature gradually rose until by Wednesday we were fishing is shirt sleeves; the lunch time air temperature reaching 16 degC at Aberlour. By Thursday, the water had risen by 2’ and it continued to rise before stabilising and fining off on Saturday.
Catches were obviously affected however there were still around 10 fish recorded. Rothes & Aikenway was top beat of the week, with Gordon Angling group members Bill Goodlad and Bob Hughes amongst the luck rods. Keen Spey angler Michael Ritchie from Fraserburgh caught a cracking fish of 13lb fresh from the sea, still displaying evidence to that fact.

Local loon, Mark Morrison caught a nice fish from Delagyle, their second, and retired solicitor and well know Spey angler Bill Johnston landed the first fish at Kinermony in 2011. I was delighted to play a small role in its capture and more so in seeing the expression on Bill’s face as it slid into the waiting net. 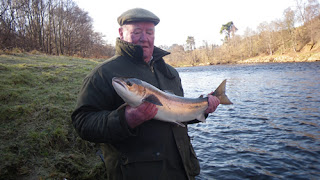 My good friend Duncan Egan was over on Deeside last Friday Saturday and although the River Dee was still very much on the high side, he weedled out a cracking 13lb fish from the Lower Ferroch at Cairnton on Saturday. 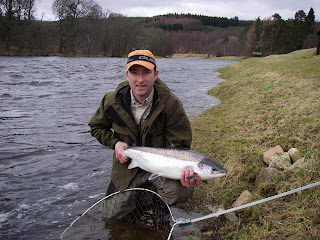 Video footage of Duncan's fish.
Prospects.
The 7 days forecast is quite settled. With the fluctuation of water levels last week, we are very much hopeful of more stable condition this coming week. I’d be very surprised if there weren’t a few fish reported over the next few days and hopefully some fish caught further up-river. As we enter March, numbers of fish will gradually increase and I’d recommend that you get out and wet a line, after all, these early fish are at their very best. Again, concentrate your efforts on the warmest part of the day and whilst the water temp remains low, stick with flies of around 1.5-2” fished slow and on intermediate lines.
Posted by Speyghillie at 10:30 No comments:

Casting For Recovery
We are running an on-line auction through the very friendly and informative
Salmon Fishing Forum in aid of the Casting for Recovery initiative, linked above.
There are various Salmon fishing related lots on display and the auction will end at 8pm on the 30th April. All proceeds will then be donated to this very worthy cause.
Please take a little time in visiting their site and perhaps joining us through this link at the Salmon Fishing Forum where, after a very straightforward enrolment process, you will be able to donate or bid in the auction.
Many thanks in anticipation, your support is greatly appreciated.
Posted by Speyghillie at 06:29 1 comment:

The opening week on the Spey has been blessed on the whole with good fishing conditions, both in terms of water height and ambient temperature. After the flurry of activity from the kelts over the first couple of days, action has very much settled down. There have been 15 fish recorded so far with Upper Arndilly catching 5 of them. Forres tackle dealer Kenny Walker was one of those lucky enough to land a springer this past week and his weighed 8lb and was caught on a Willie Gunn tube. Delfur didn’t take too long to get off the mark and did so in fine form. Mrs Anne Cameron landed 2 fish weighing 10 and 15.5lbs respectively and lost a third. Both were caught on an intermediate line and a Black and Yellow tube fly, tied by ghillie Grant Morrison of Malloch Trophy fame! Annie caught the fish under the watchful and very capable eyes of Delfur head-ghillie Mark Melville whilst fishing the Hollybush Pool. This pool can be a pretty cold place in the spring, yet I don’t imagine for a minute either Mark or Annie felt anything other than jubilation as the first fish slid over the net. Mrs Cameron’s husband Neil won our Glenfarclas Fish of the month last April with a 25lb salmon, so perhaps with only a few fish caught this month, Annie might join him. 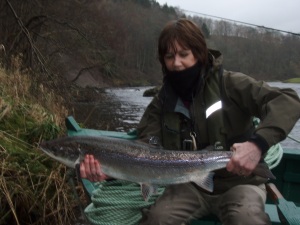 Aberlour taxi owner and former ghillie Willie Roy added to Delfur’s total on Thursday with another fish again coming again from the Hollybush. Knowing Willie, even without the morning sun, I don’t think he would have felt the cold too much either!
Spey fishery board correspondent Malcolm Newbould was also amongst those fortunate enough to record their first fish of the season this week. Malcolm caught his fish of 10lbs in the Junction pool at Rothes on Saturday.
Master Fly tier Duncan Egan fished at Kinermony on Saturday and as you can see by the photo below, he arrived from the south bearing gifts. Just click on Duncan’s name for details of how to order his flies, including the Kinermony Killer Flamethrowers pictured. We fished the water very hard but nothing fresh to report. I now know the reason for his nom de plume ‘Lastcast’. Duncan fishes until he can no longer see his rod tip, no matter what time of year. I am mighty thankful that his rod was 13’7” and not 7’13” ! 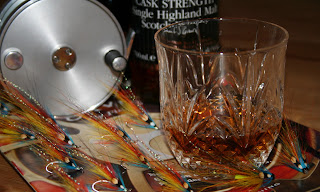 The annual Ghillie supper took place at the Archiestown Hotel last Friday. We were given the customary warm welcome from Alan and Jayne Hunter before sitting down to enjoy a wonderful 3-course meal. The meal was delightful as were the fine wines and Speyside malts on offer. A thoroughly first-class time was had by all present and when the dulcet tones of ‘She’ll be coming round the mountain when she comes’ were heard, we all knew that it was well past bed-time. On behalf of all ghillies and wives present, I’d just like to thank Alan and Jayne once again for their kind hospitality.
Finally, Orton, Delfur & Arndilly have now all recorded their first fish of 2011 to women anglers. Whether this is simply down to ‘lady luck’, skill, perseverance, female pheromones or simply a mixture of all is a matter of opinion, but if they could bottle it, I’d certainly be one of the very first in the queue.
Posted by Speyghillie at 06:27 No comments:

River Spey Opening Day
The River Spey was opened in grand form last Friday 11th Feb by Mrs Ishbel Grant, director of Glenfarclas distillery, by pouring a bottle of Glenfarclas finest malt whisky into the river from the Aberlour suspension bridge. This was preceded by an introduction to all rods by local businessman and keen Spey fisher Brian Doran. Mr Doran welcomed all guests and gave a brief synopsis of the 2010 season before wishing all present a successful season ahead. The gathering and river were then blessed by Aberlour & Craigellachie minister Rev Shauna Dicks. To help celebrate the start of the season, Kate Wright, Sales & Marketing Executive for Glenfarclas, offered a dram of Glenfarclas Single Malt Whisky to all present. Walkers Shortbread also provided samples of their renowned biscuits during the opening ceremony, all of which were greatly apprecieted. 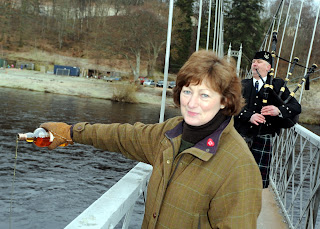 First fresh fish of the season was caught by Mrs Evie Glass on the Orton beat at 10:25am. The fish was estimated at 13lbs and verified by ghillie Andrew Hall. Andrew also netted the first fish on 2010 and has quite a taste for the delightful Glenfarclas! Evie was presented with the Spey Quaich, a Walkers of Aberlour Luxury hamper and a bottle of Glenfarclas 175th Anniversary Highland Single Malt. Andrew was also presented with a Walkers luxury hamper and a bottle of Glenfarclas 105 Cask Strength Highland Single Malt. 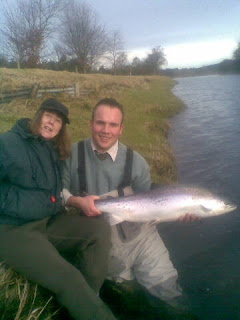 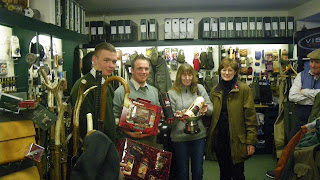 The next fish registered was caught by Spey regular David Smiley fishing with his old pal and Delagyle ghillie Willie Mearns. Dave caught the 11lb fish on his 3rd cast and Willie was on hand to assist in its release. Willie commented that it was the 5th opening day fish that he had recorded in his 23 years as Delagyle ghillie. The last coincidentally was also caught by Dave Smiley 5 years ago. Dave was presented with a bottle of Glenfarclas 40 Years Old Highland Single Malt and a Walkers luxury hamper and Willie Mearns was presented with a bottle of Glenfarclas 12 Year Old Highland Single Malt and again a Walkers luxury hamper. 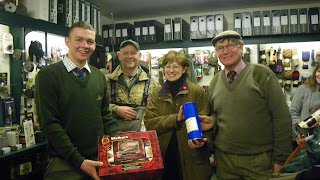 There was a third fish registered and it was caught by Port Gordon angler Mike Clark from Upper Arndilly. Mike was presented with a fantastic arrangement of Salmon flies tied by River Dee ghillie Sean Stanton. It was very thoughtful of Sean to send over a box of his first-class flies, especially considering he is currently suffering from Limes disease. We can only thank Sean for his generosity and wish him a very speedy recovery. Sean’s flies are available from http://www.theghilliesflybox.co.uk/ 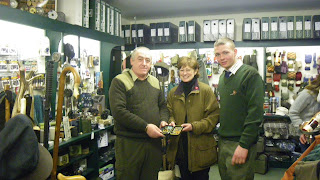 On behalf of all River Spey anglers, I would like to congratulate all the prize winners and thank all at Glenfarclas and Walkers of Aberlour most sincerely for their continued sponsorship and commitment to the opening day and beyond.
The conditions on opening day were very good and reports were that most rods tightened their lines at some stage with the kelts from last seasons. We were again blessed with good fishing conditions today although I have not heard of any further fresh fish being caught. Let’s hope for a good spring on the Spey in 2011 and increased communication within all river agencies.  I leave you with a few words taken from the River Spey Fishery Board annual report 2011, Chairman’s Foreword -

The ‘art’ of running a salmon river is very definitely in communication.
Posted by Speyghillie at 06:23 No comments: 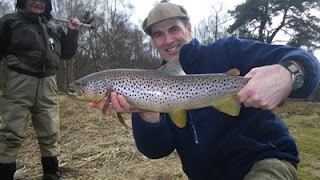 Pictured is a trout caught earlier this week at Kinermony, estimated around the 4.5lb mark. Hopefully we'll entice it around the Olive hatch again in April. Although a little on the lean side, it has still retained beautiful colours.
Posted by Speyghillie at 11:09 No comments:

Willie Mearns and I broke off a large chunk of ice today at Delagyle as seen in the photo. More than enough for a large G&T! 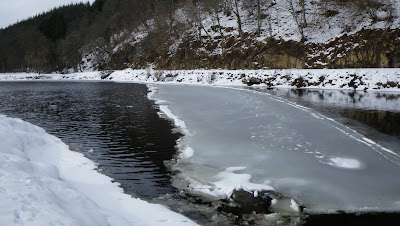 Posted by Speyghillie at 05:15 No comments: 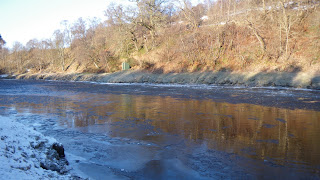 Monday 22nd February and a very cold start to the week. The grue made fishing impossible today and there doesn't appear to be any change in the forecast over the next few days.
Posted by Speyghillie at 07:14 No comments:

Opening day on the Spey was blessed with excellent conditions and lucky angler Mr Alastair Dodds caught the first fresh Salmon of the season at Orton. He wins the Spey Quaich along with a Walkers luxury hamper, a Bottle of Glanfarclas 30 year old and a 15' Salmon rod donated by Sharps of Aberdeen. Most anglers tightened their lines with the less glamourous 2009 models and enjoyed dusting off the cobwebs.

Posted by Speyghillie at 11:34 No comments:

Fun on the Spey

Pictured is Mike Martin playing his second fish of the day. Both were very fresh for this time of the year and put up an excellent account for themselves.

Posted by Speyghillie at 10:31 No comments:

Speyghillie
I am the Ghillie on the Kinermony beat of the River Spey situated just above the town of Aberlour, in the heart of Speyside. I have spent over 30 years on various rivers throughout the World, catching in excess of 1000 Salmon and have gained a great deal of experience in all aspects of the sport. On leaving school, and whilst waiting to join the RAF, I was very fortunate to spend a year on the Deveron's finest - Forglen beat, under the watchful eye of legendary Ghillie Jonathan Taylor. Not only did Jonathan and Jock Masson teach me a great deal about Salmon but indeed many lessons on life in general. Both were remarkable men, excellent role models and of course, in the tradition of distinguished Salmon fishers, great raconteurs.